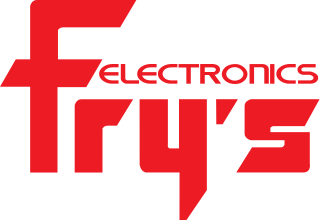 The phrase “End of an Era” sounds cliche, but in this case it really is the end of an era. Fry’s Electronics was the last bastion of geekdom, it was the WalMart of electronics/computing/snacks. The closing of Fry’s Electronics bookends the era that I grew up in.

Fry’s Electronics wasn’t especially good at any one thing, what they lacked in specificity was made up for in grandeur and selection. If you wanted to buy an external DVD drive, they had 40 different examples in different speeds, dual layer, not dual layer, R/W, ROM, etc. If you needed some RAM for your computer, you could choose from 10 different manufacturers in different speeds and densities. What Fry’s brought to the table was an overwhelming volume of stock on hand. If you NEEDED a new hard disk right now, you could hop over to Fry’s and get one.

Fry’s was the last of the original electronics retailers in Silicon Valley, they were the biggest and outlasted the rest. Storied institutions such as WeirdStuff and Halted’s (HSC Electronic Supply) to the more obscure shops such as A-Z Surplus and Action Computer, and companies such as NCA computer tried to compete with Fry’s, but loss leaders every week are hard to compete with.

The writing was on the wall for a long time, high rents, reduced variety of surplus, more competition, shifting scope, and a lack of new blood all contributed to the death of these institutions. In WeirdStuff’s heyday they occupied the building across the street from Fry’s Electronics’ first building, the big DIP chip. As I recall, Weirdstuff had 100,000 square feet of store space, that was just amazing for the picking and bargain hunting. Places like WeirdStuff and Halted’s had amazing potential for bargains and gems. Fry’s had a reputation for being a bargain/discount store, but as time went on it got harder and harder to find bargains, it was just a large variety of in-stock items.

The last thing I can recall buying at Fry’s was a 1.5TB hard drive, this was around 2012 as I think. I don’t have any memories of especially notable bargains at Fry’s, but one unusual item sticks out: A PC case that looked like a first generation iMac. It had a 15″ LCD flat screen and you could install a Micro-ATX motherboard inside. The front had an integrated floppy drive, speakers, and CD-ROM drive. The case did not have very good ventilation and cooked a couple power supplies (and a motherboard). In the end I saved the LCD display for a future project and scrapped the rest of the case.

NCA computer was on the corner of Lawrence Expressway and E Arques Ave in Sunnyvale, just up the street from Fry’s, WeirdStuff, and Action Computer. They occupied an oddly shaped building and had blowout sales every week. In 1996 I purchased a 2GB Fujitsu SCSI hard drive and a 17″ Princeton monitor, I recall the cost for both being around $641 at the time. It was a miserable day, raining and I was driving home in a ratty old import pickup truck that was humid and had a giant monitor box taking up half the cab. I was glad to get home that night, traversing the “hill” at night in a sketchy vehicle, while raining, was not my idea of fun.

WeirdStuff occupies a formative portion of my life, I was around 12 when I started accompanying my father there on the weekends. My favorite thing was the AS-IS bins, they were stacked high with motherboards and add-on cards, all unceremoniously stripped of any socketed chips. They were adorned with a sticker that read: “Guaranteed not to work, if it does you can bring it back and exchange it for one that doesn’t”. These bins were pure gold for someone who had little or no money but was ambitious and smart — you could scrape together ROM images from here and there, buy some RAM, maybe a CPU, and have a working motherboard. Need a CGA video adapter? They had tons of them. At that time it was ~1988 era EGA cards that were the bargain, because you could extend the life of an old CGA monitor. I had an Everex EGA/parallel card, similar, if not exactly the same, as the one I have now.

They were adorned with a sticker that read: Guaranteed not to work, if it does you can bring it back and exchange it for one that doesn’t

Halted’s was a little different speed than WeirdStuff, they had everything from racks to electronics, radio equipment, computer parts, and all sorts of random surplus, it was a more diverse collection. I purchased my ENCO lathe and a Rong-Fu Mill Drill from them. Some guy in Fremont was cleaning out his garage and they purchased all of his home hobby machine tools. For one reason or another they didn’t find a buyer right away, but I heard about it from my father. I went there and looked at everything — a 15×40 lathe, R8 mill-drill, and tooling out the wazoo, then I made them an offer of $4,000 for the lot. Not long after, I was driving a sketchy box truck that couldn’t hit 55 on flat ground, up the “hill” at 35mph with a 3,000 pound lathe in the back, gently letting me know on every corner that this wasn’t exactly the right vehicle for the job.

Action Computer was at 500 Lawrence Expressway, Suite D. Next to them was a Subway, and for a while, at the end was Disk Drive Depot. In 1993, and again in 1995, I would purchase motherboards from them, both of which I still have today. I paid just shy of $100 for a 386DX-40 motherboard in 1993, and a bit more for a 486DX2-80 a couple years later. They were a smaller outfit, a little low-key, but had an interesting assortment of surplus and new stuff. For a birthday in 1991 or 1992, I got a little industrial PC that had a NEC V20 processor and 3 SIMM slots. When fully populated it had 720KB of memory. Sadly, it died shortly thereafter and my father was able to exchange it or whatnot. What I got as a replacement was a 10MHZ 286 Altos WS-100 orphan. These were 2 slot workstation computers meant for connecting to Unix servers as slightly smart terminals. The motherboard contained all of the peripherals except the video card, so you’d slot a video card and network card into the 2 available slots. I still have this computer today, although time has taken its toll and it does not boot up reliably anymore.

A-Z Surplus is the last shop I’ll talk about, I think they disappeared relatively early and they were in a somewhat unconventional location. When all of the major players were in Sunnyvale A-Z was in San Jose, I think on Stevens Creek (it’s 30 years since I visited), so they were off the beaten path. What was notable to me is that aside from the Commodore Plus 4, or TRS-80 Model 3 they had on display (at dear prices to me), they had acquired a significant amount of surplus from MAD Computers in San Jose. My first PC was a MAD-1, comprised of 2 modules that stacked on each other, as seen here:

My father met some people from MAD and started buying surplus from them directly when they were liquidating their inventory and going out of business. The administrator who was overseeing the liquidation got tired of dealing with the low-ball offers from the surplus outfits and made my father a ludicrous offer: Everything you see here, $20! Needless to say, they didn’t have to ask him twice. What unfolded over the next week was heaped pickup load after load of surplus computer parts. Trying to find a dry place, any dry place, to store all of the parts was a challenge. I still have a couple 24×24 moving boxes full of DIP IC chips in rails, brand new and untouched.

I think it’s very probable that the MAD-1 shown on the Computer History Museum site was donated by my father, I know he donated a MAD 5000 and MAD 3000, both 386 based UNIX systems.

I feel sad that an era has passed, gold mining the computer surplus shops is over. It’s sad that Best Buy and WalMart are the only places I can get computer parts in person — a carefully curated selection of parts with prices that leave you wanting. I miss the excitement of finding that little nugget that means so much to me, but is passed over by everyone else.